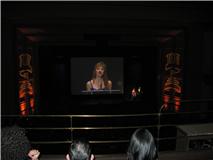 Brad Bird won one of the Windsor McCay Awards. He was busy working on MI4 and sent in a video of his acceptance speech. It was fricken’ hilarious, with a cameo appearance by Tom Cruise.

Eric Goldberg also won a Windsor McCay Award as well as Matt Groening who gave a great acceptance speech as well. The mastermind behind The Simpsons and Futurama announced that he is working on a new project. All I can say is….put me in it!!!

For me, the show ended wonderfully when Tom Kenny brought me out on stage. He introduced me to the audience as the announcer and then had me do a “bit” at his podium. I can’t tell you how many people asked me at the after party if I am really the curbside voice at the airport. Too funny!!!

The after party was a hoot! It was all about food, friends, photos and new connections. It was a truly great night! And to all my friends who partied after the party, “we owned that sticky floor!”

P.S. If you look closely at the picture, to the right you can see me and Tom Kenny on the stage at the podium.