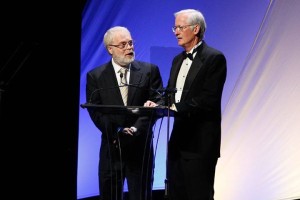 Ron Clements and John Muskar, are the men behind such classics as, The Little Mermaid, Aladdin, Hercules, Treasure Planet the Frog and the Princess, and more. Besides having amazing films to their names, the two are a hilarious comedy duo. During their award presentations, they had the audience laughing at every turn. But what surprised me the  most was when these two incredibly talented men, stood out on the Annie stage, and thanked me for all my years of announcing. I really didn’t think anyone noticed, but did they proved me wrong. I can’t thank them enough for their kind words. I am sincerely touched. I look forward to seeing them again next year and honestly, I hope I get to work with them in between!