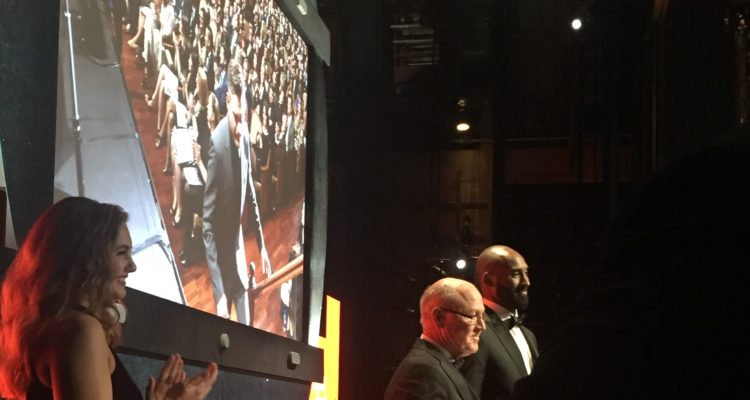 The 44th Annual Annie Awards went off with nary a hitch…okay there were a few, but were they funny. That’s part of the beauty of this awards show and the animation community! We all just have fun and recognize what an amazing world we can create and what these creations add to our world.

Where else would you find Kobe Bryant cracking jokes with legendry animator Glen Keane? I mean seriously, and they were funny!

Where else would you find a lifetime achievement award winner accepting his award and his interpreter standing at his shoulder, couldn’t hear him to translate? Okay, just picture it…he is speaking Japanese into the mic and she is standing next to him, shaking her head and saying into her mic, “I don’t know what he is saying.” Followed by more head shaking and, “I can’t hear him.”

And where else would you see an award winner accept her trophy, turn to face the audience to speak, and drop the trophy? CLANG! (Personally, I have never before heard a whole packed audience inhale at exactly the same time!) Yes, it broke. She kept trying to adjust the top back on, but it just rested on the podium, it’s top half pathetically hanging at an unnatural angle.

I can’t make this stuff up. Just leave it to the quirky, creative, fun and talented animation folks to make a typical award show, really entertaining!

If you weren’t lucky enough to see it live, you can still see it streaming. http://annieawards.org/watch-it-live/

I feel so fortunately to be a member of this community and a part of the Annie Awards team.

Here are a few pictures from the night. Tucked away back stage, it’s always exciting work to announce a live show. The Annies...More

Haute couture for the Annies and Red Carpet http://annieawards.org/watch-it-live/ ...More