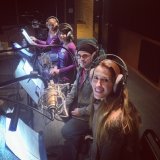 One of the best parts about this Disney project, is that I get to work with some really great people. Group reads are always so much more fun! Actors sometimes say things like, “Oh man, I had to learn a bleedin’ accent.” In this case we are “bleedin'” accents… all over each other!This week we recorded 2 episodes and the accents were flying! We’re talkin’ (literally), Peruvian, Polynesian, Dutch, French Canadian, South African, New Zealand, Columbian and Chinese…I think that was all?! Elle has a lovely Scottish accent, and that is what she talks with when she isn’t speaking in her character accent. The funniest was when our dialect coach, Joel Goldes told Elle to pronounce a particular word with more of an American accent. And her response was, “Wait, your saying this to the girl from Scottland!” I feel like the kids version of the United Nations!